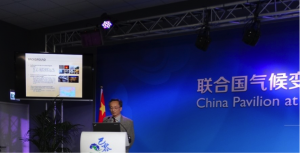 On December 4th, 2015, during the 21th session of the Conference of the Parties (COP 21) to the United Nations Framework Convention on Climate Change, the Ministry of Science and Technology of the People’s Republic of China, the China Meteorological Administration, Chinese Academy of Science and Chinese Academy of engineering organized theme side meeting in the Chinese angle, making depth interpretation on the relevant scientific evidence and important conclusions of “the 3rd China’s National Assessment Report on Climate change” (hereafter “the REPORT”), and showing China’s efforts and achievement in recent years on climate change, its effects and adaption, slow-down, economic and social impacts, international cooperation etc.

The REPORT is a comprehensive and systematic collection of China’s response to climate change from scientic, technological, economic and social researches. It is a reflection of the research progress of the scientific community in the field of climate change, and the assessment of social and economic impact of climate change is also added to the report. Indicated by the REPORT, the speed of warming in China since 1909 was higher than the world average, around 0.9-1.5 ℃ in the century. Sea levels in costal areas of China arouse by the speed of 2.9mm per year from 1980 to 2012, which was also faster than the world average. From 1970s to the beginning of the 21st century, glaciers retreated about 10.1%, area of frozen soils decreased 18.6%. In the future, the temperature of China will continue to increase, by the end of 21st century, might increase 1.3-5.0 ℃. Precipitation might increase 2%-5% nationally, with the northern part increase 5%-15%, while no significant change in southern part. Heat waves, extreme drought events might increase; sea level might continue to rise.

In the REPORT, more than 10 experts and scholars from Beijing Normal University, Institute of Geographic Sciences and Natural Resources Research, CAS, Institute for Urban and Environmental Studies Chinese Academy of Social Sciences, and the National Disaster Reduction Center, gave comprehensive assessment of the achievements of China’s response to the risks of climate change, and suggested addressing the challenges by integrated risk governance.