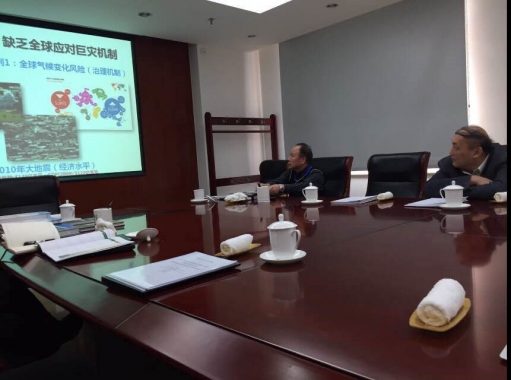 Prof. SHI Peijun, the co-chair of IRGP, introduced the background, history, achievements of phase 1, plans of phase 2, challenges and opportunities of IRGP and put forward the needs for future development to NSFC. The co-chair of IRGP Prof. Carlo Jaeger introduced the current front issues on international risk reduction research, such as systemic risk, complexity of the socio-economic system, dynamic structure of multi-layer system and raised the issue of coastal risk prevention combined with the national strategy “the Belt and Road Initiative”. Prof. YE Qian, the executive director of IRGP, made additional remarks and Prof. YANG Saini, the director of China office of IRGP participated in this work report.

NSFC positively responded to the reports of co-chair Prof. SHI Peijun and Prof. Carlo Jaeger. President YANG Wei spoke highly of the past achievements of IRGP and emphasized that the government is giving increasing importance to international cooperation. It is a good opportunity to strengthen international science program and accelerate development for our country. A series of feasible plans were brought up by President YANG Wei on how to promote the international cooperation of IRGP.